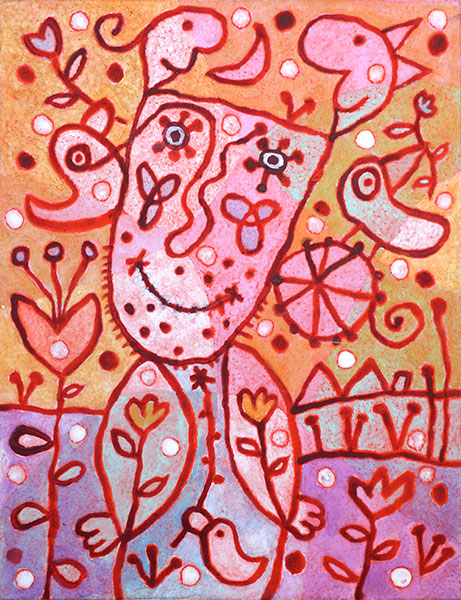 Michael Leunig on IKEA: A glimpse of life in the land of KNODD

Out through the front door I went into the morning sunshine, and there on the letterbox, gleaming and fresh was the new IKEA catalogue.

All along the street IKEA catalogues lay plump and promising on neighbouring letterboxes. Santa Claus could not have done a better delivery.

I must declare that I am not really an IKEA man. I become quite disoriented and distressed if ever I find myself in one of their stores. I can’t last long. Furthermore, I probably have an irrational aversion to mass modern ‘design’ and become more forlorn and conservative as the design gets hipper, smarter and cooler.

In the foreword to this sumptuous catalogue (page 3) I read that the ambition of IKEA is “to make things better for many people” (particularly the IKEA shareholders I imagine) but I must say that I am very wary of affluent things getting better and have witnessed various irreversible disasters in the name of betterment and design cleverness. Designers are forever trying to improve things that are perfectly ok, and often they are just making human hands more lazy and useless, as well as making things more unrecognisable or worse. Designers are forever overreaching themselves, probably just to stay employed. The world is designing its way to smarter forms of silliness and citizens are being enticed into a life that is designed but not necessarily loveable or liveable. I saw a public litter bin recently with a sign on it that said it was a smart bin, but I remain a huge fan of dumb bins.

I have been told that IKEA is where you go when your marriage breaks up and you need a whole new set of furniture and cooking utensils to put into your flimsy, newly rented, recently built, dog box apartment which has been constructed in violation of common sense and building regulations. It seems that you can walk into one end of an IKEA store and come out the other end with a new lifestyle that looks suburban Swedish, superficially clever and a bit cheap - which is just the thing if your life has recently been dysfunctional, stupid and expensive. You can emerge from IKEA with a new cultural outlook, which may last as far as the car park or until you get to the first traffic jam.

There are various redneck politicians in this country who should be concerned about this Swedish assault on the Australian way of life but I suppose Swedes have given us ABBA so maybe we can make an exception. Also in their favour is the fact that they don’t sell squat toilets and that means they are our kind of people - sort of.

But really, what is it about IKEA Swedes that they give pet names to their tables, chairs, cupboards and utensils? The catalogue features a sofa by the name of Stocksund. A coffee table named Lisabo. Plufsig is the name of a folding gym mat. There is a frying pan called Oumbarlig, a clothes rack named Mulig, a cot called Stuva, a storage bag has the moniker Algot - and my favourite: a rubbish bin called Knodd – the perfect name for a bin in my opinion.  It goes on and on, this peculiar Nordic personalisation of inanimate objects. Clutter might also be an appropriate name for many snazzy catalogue items.

My favourites are simple things with no moving parts or joints or joins – such as Pokal the glass, for 99 cents, or Oftast the white bowl for 89 cents. Both ideal for the old Anglo-Celtic tradition of flying crockery, where Pokal and Oftast get smashed in a domestic row about nothing.

Kragsta, the nest of small tables for $139 on page 126 would probably disintegrate quickly in any expressive marital dispute – and this might explain why intact IKEA furniture is never found on hard rubbish piles. It’s always broken.

But let’s not be snide, petty or negative. In spite of divorces, household jostling and domestic upheavals, the sumptuous catalogue offers a bright way forward to a better life, with advice on how to enjoy friendships and group cooking (no mention of group sex unfortunately – whatever happened to the sexy Swedish image of the good old days?)

There is a very pleasing multicultural mix of model humans seen draped about on the sofas and indeed it is difficult to imagine that these cosy and genial lounge lizards are descended from Hagar the Horrible and other barbarians with horned helmets who, with extreme bad taste, raped and pillaged their way mercilessly around the North sea villages back in the olden days.

To be fair however, the cover of the 2017 catalogue features a candlelit dinner for three females and a bearded male; all youngish and of orgy age. Above Raskog the trolley is a glaring price tag which jumps out at you and just happens to be $69! Let me tell you, the graphic designers who organise these covers are sneaky cunning devils who know exactly what they’re doing and know about subliminal messages, innuendoes and subtlety that attracts the murky primal unconscious mind. Speaking of which, there is a baffling reference (and possibly a mishap) on page 90 in an introduction to an interview with a female who works in IKEA sales and business development – and I quote:

“Although she’s travelled a lot, and finds herself more ‘rooted’ nowadays, she describes her ideal living situation as being a digital nomad with not one, but three, homes”. This sort of ambiguity baffles me. In my male working class cultural background, the word ‘rooted’ can mean either that she’s more settled, or else that she’s very exhausted. Whatever, we get a glimpse into the personal lives of various IKEA team members who have philosophies to impart about the way we now might live. IKEA is not just selling things, it is teaching things.

There is lots of comfy reading matter and sound advice about good living, cooking, sleeping, pampering, bathrooming, friendship, pillows, food and all things cosy and good. Alas there is no IKEA coffin being offered for the old folk; an ageist oversight indeed, and if there was one I can’t quite imagine what its name might be. Maybe Klünk? Something like that.

I feel that the article about IKEA refugee shelters was a bit incongruous and unnecessary, as would have been an article about homelessness and sleeping rough with only a Hulsig

Eventually I found the catalogue an unhappy thing and named it Junk Mail, but at least it caused me to think wistfully about my grandmother’s dining table and kitchen dresser, which were named respectively, Table and Dresser.