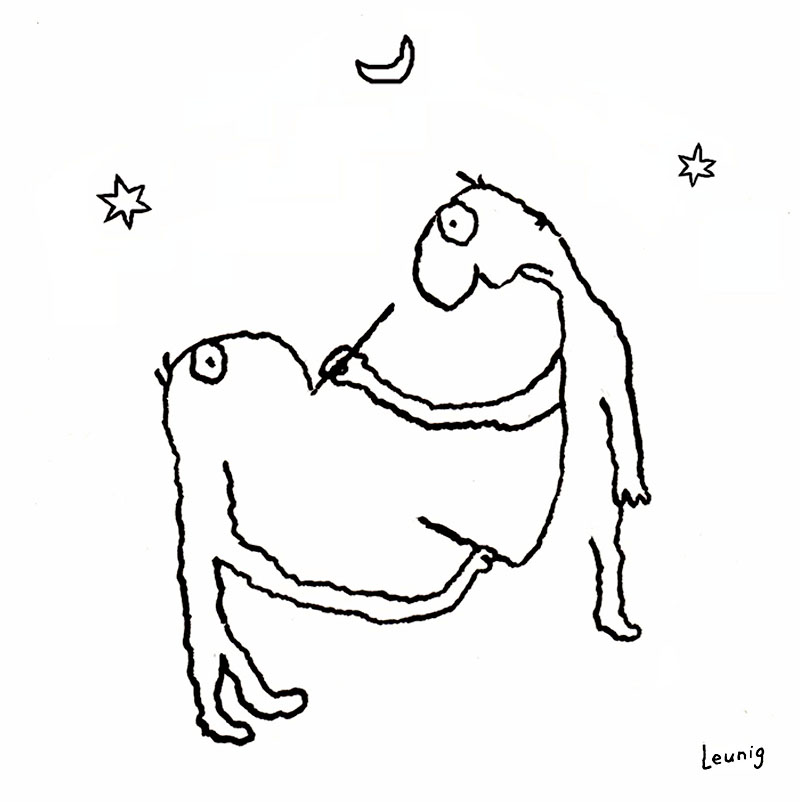 A WORD OR TWO ABOUT CARTOONING

I began cartooning for newspapers fifty-five years ago and through all of those years, deadlines, wars, social change and controversies - cartooning has landed me in a fair bit of trouble. Trouble goes with the job. It’s never easy coming up with a worthwhile cartoon, and in the rush to deadlines during more than half a century of dipping a pen into the psyche many mistakes were made. This peculiar work of expressing what is repressed has afforded me some extraordinary views into human nature and the state of my society - particularly from the mail I have received from readers along the way.

Much of the mail has been eloquent, respectful and very touching, and there was also intelligent criticism which humbled and stung - but there is this other thing called hate mail which reveals the malice, envy and angry bitterness that lies mostly hidden in our culture. Some people want to hurt you. I have received so much of it in my life that I donated my hate mail collection to a major public library, so fascinating and horrible was its content. I have appeared in court charged with obscenity and have stood beside a fellow cartoonist as he opened a bulky piece of mail that turned out to be a letter bomb that malfunctioned and failed to explode. That’s how traumatic a cartoonist’s relationship with society can be. There are serious haters out there and the readership can be a minefield of people who very readily and very angrily take great offence.

Hatred can give much energy, meaning and purpose to an otherwise forlorn or failing personality. The advent of social media has given us the modern digital troll, a skulking personality who likes to hurt and does a sort of psychotic online road rage from the safety of a keyboard in a dark cave or a cosy room. Perhaps it is a sort of primal therapy for the trolls, or a recreational activity, but it makes the comments sections of online newspapers depressing to read - not just because of the endless, fruitless and futile conflict that transpires, but also because the terms of insult, shaming, humiliation and attempted character assassination are so clichéd, conforming, repetitive and fashion driven that it would seem that haters all speak the same miserable predictable dialect. It is the voice of the mob and for the anthropologist and psychoanalyst in me it never ceases to amaze.

A good cartoon can be a sort of Rorschach test. The reader interprets the inkblot according to their own obsessions or neuroses. Different people find different things. Hence the famous joke about the patient who sees nothing but sexual activity in a series of tests. The psychoanalyst raises the possibility to the patient that they may have sex problems, to which the patient replies “But doctor, you’re the one who’s drawing all the dirty pictures”. Well it’s often like that for the cartoonist, who is sometimes accused of all sorts of bad and shameful things that are not in the cartoon at all, it’s just that the mystery or ambiguity and humour in the cartoon has been a catalyst which awakens what is lurking in the viewer’s psyche. The drawn image is a primal emotional thing but it is not necessarily autobiographical. The viewer may have taken a literal view of something that is in fact evocative visual poetry relating to a complex theme. The cartoon is there, not always as an explicit opinion but as a matter for reflection and contemplation. A literal appraisal of the work will always get it wrong.

The modern secular world where data matters most is moving too fast and too reactively for much contemplation or reflective public humour. We are becoming secular data people but art, humour and poetry are spiritual matters. Quick hard punch lines are preferred these days and wisdom, subtlety, mystery or tender complexity are not greatly appreciated. We are quick to criticise and reluctant to contemplate. Art becomes a hollowed-out, fashionable and novel commodity, negative capability becomes obsolete. Soon enough, newspaper cartoons are seen only as expressions of the cartoonist’s personal opinions – at least that’s how they are mostly regarded it would seem. Then bring in the anonymous trolls to do their thing and it all turns into a poisonous mess. Steadily, troll culture and troll idioms enter into politics, personal life and public discourse as debate and discussion become cruder, more bullying, more discourteous and less civil. Thus our public culture increasingly turns into an ugly stupid debacle.

I recently drew for the newspaper a cartoon about some disturbing aspects of the Covid lockdown in the sate of Victoria. Dangerous territory. In my view there was nothing in the cartoon that anyone would need to agree with or disagree with. It was not an opinion piece, it was a mood piece. I was attempting to hold a mirror up to my society in the hope that for some it could be a small piece of cultural therapy. No value judgements, no opinions, no sneering. Simply witnessing the pity and the pathos that is plainly evident and undeniable in the current lockdown situation. I believe it is healthy to acknowledge and portray what is real and true; particularly the small but significant things that may lie neglected right there under our noses. This may be a touch discomforting for some but I believe that ultimately it is good therapy. But of course, then follows for this cartoonist the deluge of shaming, insult and righteous lecturing; the accusation that I am selfish, anti-mask, that I don’t know or care about people dying, that I’m a privileged ‘booma' (I’m actually too old to be a baby boomer), a conspiracy theorist, an irresponsible idiot in a tinfoil hat etcetera, etcetera; all manner of silly derogatory clichés, assumptions and projections that have not come from the cartoon but from the critics jumping at shadows and obsessions in their own minds. Amazing fantasies! The Rorschach test comes into play.

Such critics know nothing much about me. I dare say I am a fairly cooperative law abiding citizen, I wear a mask (well, a bandana actually), I keep the curfew, I do all the "right things” and the whole business irritates me considerably – but what can I do but respect people’s concerns and obey the law? I also have my duty as a cartoonist who cares about my society and believes that unquestioning blind faith in leaders and experts can be tragic folly.

As a nineteen year old I was shamed, insulted and abused for resisting conscription into the atrocious war in Vietnam that an Australian Prime Minister got us into. We were told that our nation faced an existential threat from Asian communism and after I did my homework I didn’t believe it. Alas, many people did believe it and fear took hold. In conscience I was a naysayer and the government were the conspiracy theorists as far as I could see - they called it the domino theory and they said we had to protect ourselves. History tells us that leaders lie and can be grossly incompetent. As it turned out Australia was not invaded and the Vietnam war was a disaster for all. It was estimated that three million people died. And the same with the Iraq war; the leaders lied and the threat to the world turned out to be a corrupt cynical fiction. Millions were killed and injured. Iraq was poisoned and shattered. All for what?

Why am I wary when leaders now say that human life is precious and must be protected at all costs? Political leaders are the ones who have led us into these cruel murderous wars. How can I fully trust that politicians, experts and scientists know exactly what they are doing when they act to protect us? It is healthy to have reservations. The author C.S.Lewis offered words of caution about leaders who impose too much upon us for our own good."Of all tyrannies, a tyranny sincerely exercised for the good of its victims may be the most oppressive. It would be better to live under robber barons than under omnipotent moral busybodies. The robber baron's cruelty may sometimes sleep, his cupidity may at some point be satiated; but those who torment us for our own good will torment us without end for they do so with the approval of their own conscience." Certainly these are words to think about.

And among the recent comments about my offending lockdown cartoon came the following gem; a few simple words that get straight to the point and sum up a wise approach to cartooning:

"A big part of art is not necessarily giving your own opinion, but making people contemplate what it may or may not mean. The dialogue that ensues is paramount…" My thanks to the person who wrote those good words.