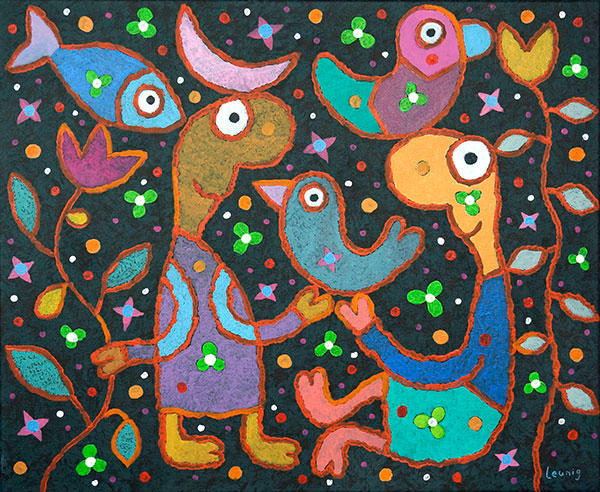 A call for an end to all the madness

On street corners, people talk of the growing madness. They speak in a dialect that survives in the instincts of young and old, rich and poor, males and females… “The world has gone mad” they say. In tones of dismay, resignation and humour they confirm their suspicions to each other. It’s as if this is a new kind of greeting or farewell.

Yet it is also their small way of grieving together about the tragic state of their world; about the destruction of meaning or the rise of hostility, ugliness and stupidity in an angry exhausted culture.

And as they lament, they also yearn. Sanity may not prevail but it lives on as a vision of love somewhere in the minds of ordinary people.

Of course, this windswept conversation on street corners is ancient. With a twinkling smile my grandmother used to offer me the old refrain: “The whole world is mad except for you and me – and even you’re a little strange”. And there was WB Yeats with his poem The Second Coming:

Mere anarchy is loosed upon the world…”

Yet though the conversation be old, there is a new dimension to it. There have never been so many people on the planet to lose their marbles and there have never before been such powerful and precocious devices, machines and weapons to express and give form to insanity. Their looming presence has given rise to an unprecedented critical mass of fear and anger on the planet – enough to drive humanity into panic and over the edge.

In the British parliament last week, the new Prime Minister, Theresa May was asked if she was prepared to launch a nuclear strike that would kill 100,000 civilians. Without hesitation, the self-confessed ‘goody-goody’ said quite stridently and without hesitation that yes, she would do it.

We could think of this as domestic violence on a massive scale. The mind should boggle but it does not because we know that the world has gone batty; so unhinged in fact that it cannot discuss its growing lunacy and the misery that comes with it. Madness is normal so why not join in?

The release of the Chilcot report into the atrocity that was the Iraq war, and the recent commemorations of mass carnage in World War one remind us of the persistent psychotic savagery that is officially ours.

Strangely, this madness, as popular, crucial and interesting as the topic is, seems too complex and vast to be openly discussed in parliament or on the television talk shows. It is probably regarded as too negative and cannot be packaged into neat bundles of information and debate. Anybody who raises the subject is under suspicion of being an amateur or even a bit hysterical. The theme is too hard to deal with and there is no Minister for Mental Health to take the initiative. After all, isn’t madness so common that it has become banal? This was pointed out recently by a bright young woman who served me in a pharmacy. Madness is not the elephant in the lounge room, it is actually the lounge room. This is the normal lounge room where citizens may sit and digest the stupefying corrosive lunacy of television.

We may well expect madness, just as we expect that most of our political leaders will be more or less crazy. We know well that the emperor does not have new clothes and into the bargain, will have no new ideas or insights. We shrug.

Yet the loss of sanity in an individual is an immensely sad tragedy to be looked upon with compassion, and the loss of cultural sanity is an utter disaster we can witness with despair.

The problem is not the divine madness or eccentricity that was the prerogative of inspired individuals like Zorba, who told us that “a man needs a little madness or else he dares not cut the rope and be free”.

No, it is the surge of a compulsive new bitterness and hostility, an antisocial infection that is cause for grief; the bad mood of modern times which is far from being free because it is so painfully constricted and constricting. It is the driver behind you, angrily blasting their horn because your acceleration at the green light is not fast enough. It is the righteous ugly clash of a televised political debate, the spiteful intensity and punishing fury of a gender equality discussion, the absurdly hostile tirades surrounding a football commentator controversy – all sorts of people are rushing to lose their marbles and imitate their heartless digital devices. And it is all assisted by the sheer maddening velocity of life. Nothing can be loved at speed.

There is something bipolar happening - not the bipolarity of depression and mania, but the split in people’s minds between ‘them and us’, good guys and bad guys, men and women, left wing and right wing etcetera; the whole divided tribalised world of the mind which gives energy and purpose to modern nations and their economies, gives momentum to every war, to all hateful fear or anger and to each psychotic act – the compulsive idea that we are right and they are wrong, that we are victims and they are to blame, that we are worthy and they are not. Herein lie the origins of derangement and imbalance. In every football match are the seeds of war.

Sanity must not be defined too strictly but its maintenance lies in the integration of opposites, the capacity to open and broaden consciousness – enough to gracefully hold two seemingly opposite things together and reflect rather than react. To be enlivened by paradox. This is a lifetime’s work. This is sanity.

Mental health is precious and vulnerable. It is a fragile ecosystem; a garden that needs constant nourishment, love and attention. We would do well to value it and be careful about what we allow into our minds. Sanity needs what is real and thrives on what is beautiful and true. Sometimes it falls apart and is gone quite suddenly.