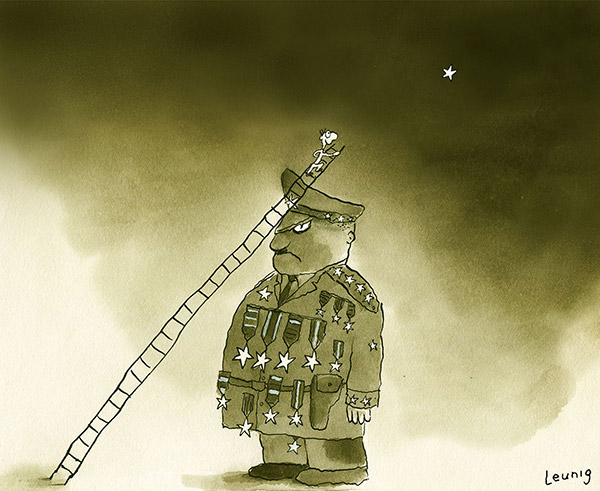 Lockstep in fire and fury

The fear of loneliness can be unbearable to most, particularly to those who are raised with a sense of threat from imagined enemies. To calm such anxiety, humans herd together in clubs and societies, families, cults and political parties; they become tribes and nations, they rally behind football teams and sing anthems under flags; intoxicated for the time being with the feeling that they are not alone. They call it fun, togetherness, loyalty or patriotism but it all begins with a lonely heart.
To reinforce collective identity and group cohesion, a perceived enemy or rival is a useful idea and a source of great energy and meaning. An ally on the other hand means that you are not alone.

And so we have learned from the Prime Minister that we are "joined at the hip" with America in the latest fight against evil. We are locked and loaded, and ready to join the brawl on the Korean Peninsula with all its fire and fury.

In the traffic jams and kitchens of Australia, the groans of dismay go up as the wry jokes and mutterings of disgust go down. The mention of hips and flesh fused together brings strange things to mind: birth defects, trousers with four legs, the problem of getting through narrow doorways, burns injuries and deformities to fetuses caused by the use of agent orange in Vietnam – as seen in formaldehyde at the war museum in Ho Chi Minh City.

When urgent military matters are at hand, a magical intimidating atmosphere of obedience and compliance can suddenly prevail. Only weeks before, we saw our leader looking theatrically urgent and dutiful amidst a vulgar media display of sinister weaponry brandished by commandos dressed to kill. It was quite a macabre and repulsive spectacle, quite kinky really, and the Prime Minister was trying hard to look commanding and natural – although somewhat awkwardly. Civilian business suits can look sadly twee and implausible in military settings.

As one who was almost jailed under the ANZUS treaty for resisting a notice of military conscription in the Vietnam war era, I got to see (close up and personal) the deeply ingrained effect of countless generations of militarism in my culture – particularly on male culture: the bullying and intimidation, the accusations of cowardice, the word "traitor". War is a mad tragedy but the cult of military fetishism which has stained the psyche of civilian males down through the ages is a radical disorder and a sorrowful disaster of great consequence. Indeed, military sensibility and behavior have become something of a persistent morbid model for civilian masculinity. The grim language of war is used casually and commonly in sport, politics and commerce. It suits our culture of conflict and the ethos of the psychological split: them and us, right and wrong, good and bad.  Indeed, a common type of bipolar disorder arising from a developmental failure in early childhood; something missing that allows humans to find great energy and meaning through blaming, hating, competing and fighting. As a motivating force it lies at the operational heart of our society. Weirdly and blithely, in this time of improvised explosive devices we have a popular football team called ‘the bombers’, and a notably obsolete prime minister wrote a book called 'Battlelines' which was not about war but about banal political maneouvring. A journalist friend who worked as a war correspondent in Vietnam would have described this superseded prime Minister as a 'war wanker'.

As young boys we were mostly war wankers. We played with toy soldiers and toy guns, we played war at lunchtime and morning recess. We saluted the flag and were formed into competing precision marching squads dressed in khaki. In make-believe, we killed each other over and over, and we vocally imitated the sounds of machine guns. We marched into class to the sound of military bands and purchased military oddments and webbing at the local army disposal store. It was the 1950's. Many of our teachers, parents and uncles were returned soldiers just out of uniform. The concept of PTSD was unknown to us but the effects were everywhere. It was our normality. Regardless of our home environments, boys were considerably raised on a good measure of military fetish – as boys have been for a thousand years.

When contemporary feminists talk of white male privilege, we might also consider the countless generations of military abuse and disadvantage inflicted upon males: a continuous line of ancestors bullied, press ganged, conscripted and dragooned into traumatic wars and brutalising army service down through the ages – to say nothing of physical injury and horror. Not so much a privilege as an accumulating curse upon an entire gender; a tragic emotional blight – a devolution that has generated much of the domineering male violence, repression and insensitivity throughout history – and much of the crippling sadness. Yet in the worst of it, men have sometimes found deep insight, love and compassion for each other.

The sedimentary layers of threat and enforced military brutality over the centuries has left men in a sorry state that they think is natural. The bloody menacing words, the fearful explosions and drums of war, the stern uniforms and displays of military might still resonate somewhere in the male soul. If it has not been thrust upon them, it has crept into them by osmosis. It’s in their bones. Many men are haunted and hounded by this savage, stupid and twisted definition of masculinity imposed or beguiled upon them father to son throughout history. Indeed it is a deformed version of masculinity – a culture of fear, compliance and authoritarianism; a legacy of dead, damaged and repressed feelings that has considerably misled and enfeebled males for eons – and influenced society to its core. This damage was called 'honour' but its influence accounts for much of the alienation, shame and depression experienced to this day by civilian and military males in Western societies. Much of it is unconscious. Much of it suffered in silence or sublimated and transformed into self destruction. Much of it is translated into the politics of hard men and their sickening flirtations with weaponry and war. It primes men for conflict. You might say that much of humanity is locked and loaded.