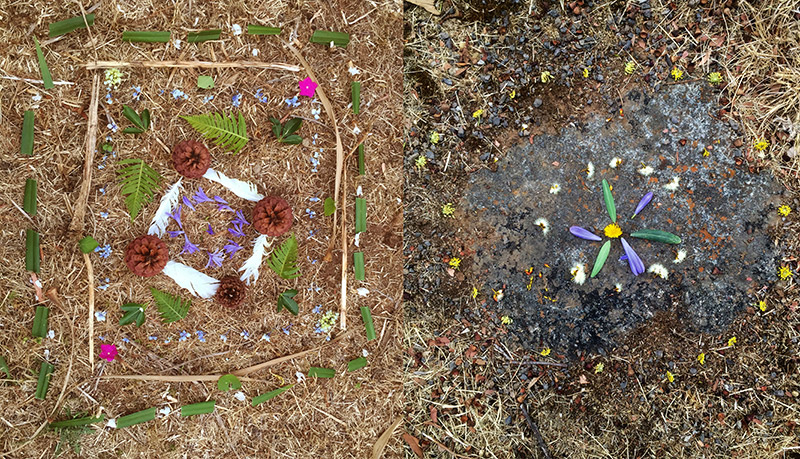 I was raised in a place and a time when art was not mentioned or heard of  very much. This was my early childhood in Australia during the 1950s. We did not have arts festivals or art centres and galleries back then and we certainly did not know anyone who was an artist. The word "creativity" did not exist for us.

Ours was a working-class family and we lived in Melbourne's western suburbs near factories, basalt quarries and  windswept plains of onion weed, Scotch thistles and  broken rocks.

The summer air sometimes stank with foul perfumes from the tanneries and abattoirs. Industrial chimneys belched dark smoke into our lives and the sound of chattering machine guns spoke to us of war, death and destruction as bullets were tested in the government  ammunitions factory nearby. Every Australian bullet fired at Gallipoli was made at the end of my street.

In the early days we had no washing machine or refrigerator, no car, no telephone or television; we didn't have mobile devices, graffiti artists, tattooed ladies, art events, body building, traffic jams, Lycra, garlic, coffee or avocados – nothing awesome or amazing whatsoever. Dogs ran free to fight and mate in the streets. It was all very humble and raw. Such was the aesthetic.

Yet in this dim frugal setting, children crouched in secluded corners of back yards, arranging flower petals and clover leaves in patterns on the soil; adding twigs and stones here and there with painstaking attention – sprinkling droplets of water and placing butterfly wings or feathers in special positions…

I have come to see that making a fairy garden in childhood was probably my first experience of art, so perfectly did it model the creative act by which I lived and worked in later life. The meanings and symbols of the childhood activity  exquisitely represented the artistic consciousness and process of maturity, particularly  the enchanted belief in a spiritual sensibility of another dimension. Not only did I believe in fairies but I actually saw one for a split second in the clover that grew in our sideway; not quite enough time to get a good look at it, but this wee flitting thing was definitely a fairy. Wasn't it?

It was my hope that if I could carefully make an enticing space and adorn it with petals, twigs and stones, the fairies would enter into this creation by night as I lay sleeping, and there they would cast spells and dance about in the moonlight, thoroughly enjoying themselves in what I had provided so lovingly and with such  innocence and wonder.

I loved the fairies  and yearned for them intensely; they were so different to all that surrounded me in my normal life. They could fly, they were magical and I wanted to be like them, so I put much sincerity, imagination and time into creating these tiny places of hospitality.

The next morning, I would hurry down to my creation and keenly study the situation; looking for the subtle signs of a visit by the little spirits. I was never disappointed and always found  clues. Things would have changed ever so slightly: a twig had moved, petals were missing, a stone shifted for a secret ceremony, the bed of leaves showing signs that something small and beautiful had slept there… Yes, the fairies had been and I felt blessed, but I did not think that this little space in the backyard was an artwork, for such a concept was unknown to me; and besides, this was my private, secret thing. Ah yes, the perfect start to a life of creativity and believing in art.

But then I grew up and the fairies disappeared. The world filled up with wars and cars and art consciousness: installation art, body art, street art, environmental art, performance art, spacial practice, video art, protest and resistance art, feminist art and much more. Creativity surrounded me like advertising or traffic.

Young artists and designers multiplied and poured from colleges where art practice and art theory were taught, along with an exclusive new intellectual art language to describe or obfuscate the  artist's work. Emerging artists became the bright new thing. Mostly they looked good and full of promise. Like mushrooms from the earth, like babies from the womb, they emerged into the excited arms of fashion and popular  culture. They were not the eccentric beatniks or murky bohemians of old; many were sharp and cool and carefully presented. Not only did their work express, it "engaged", it "explored", it "retrieved and investigated" , it "assembled and reclaimed notions of dialogue and identity as personal history intertwined with thought as conceptual narrative". They often made little sense to the curious onlooker, because both the works and the accompanying texts were frequently  brain-ridden, bamboozling and absurdly earnest – and the artworks were often joyless and boring. Many art critics and curators carried on in a similar manner and of course, all the fairies and pixies fled in dismay.

Years ago Barry Humphries warned that in Australia a person could be made to feel ashamed if they called themselves an artist. He was, of course, alerting us to the fact of aggressive philistinism. This was never an issue for me, but I must confess there have been moments in recent years when  I have felt a little queasy  about being labelled an artist because of the art clamour and the burgeoning  pomposity and gobbledygook that has overtaken the idea of creativity. To a large  measure, the world of art is deliberately inaccessible, incoherent and alienating  – and in that way, it can be repressive to the innocent creative spirit. It has considerably replaced enchantment  with slickness and gimmickry, and is inclined to forsake love or truth in favour of brute ambition.

Pixies and fairies may sound ridiculous to many, yet for me, the making of fairy gardens in childhood is a sublime metaphor about the making of art. It was an indelible, formative experience containing the essentials of the artistic impulse: love, innocence, sincerity, nature, devotion, offering, imagination, invention and a belief against all odds in an enchanted spiritual dimension that could be of crucial value to a sane society. It also suggests that the artist creates something ultimately nourishing, hospitable and kind that others may enter into.

But as I wander through the new world of art and graphic overload, as I recoil or brush against it – with all its competitions and awards, its scholarship, its tricks and techniques, the glamorous reputations and charisma; the art fame, art fashion, art envy and art greed – I grow wary and weary of this word "creativity" which is so emblazoned across modern consciousness.  Doesn't it depend on what is being created?

Art without love is pollution.

As much as I believed in fairies, I now believe that at this moment, the world needs kindness more than it needs creativity. Kindness is genius.