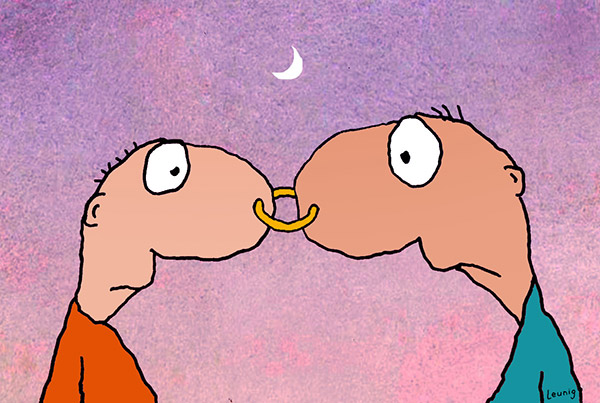 The Ties That Blind

My homosexual friends of yesteryear somehow seemed more spirited and colourful than the new generation of LGBTQ activists – and they weren’t even brandishing the colours of the rainbow in the 1960’s. Homosexuality was illegal back then, and indeed, sodomy carried the death penalty until 1949 in Victoria.

I heard accounts of the psychological struggles encountered by young gay men facing and accepting the reality of their dawning sexual preference; the feelings that could have them cast into emotional exile from their society or family. They were commonly branded as degenerates and met with much ridicule and hostility. Some went through quite an ordeal, both in facing their truth as well as in trying to live it in the world. I sensed that such running the gauntlet and surviving the ordeal had its particular strong effects on the character of such friends, bringing scars, blessings, insights and admirable personal qualities.

I easily sympathised with this plight, as one naturally does for the persecuted, and had a certain admiration for their courage and composure as they dealt with threat and self doubt.

These gay friends happened to be intelligent, creatively gifted individuals who were glad to be outsiders in a culture hell bent on promoting cosy heterosexual conformity. They were generous and kind to me, they appreciated my outsider inclinations and were indeed colourful expressive souls who were making valuable offerings to a world that mostly did not understand them.

It is hard for me to now imagine that they would have clamoured for the right to be conventionally married and thus inducted into one of the dominant approved normalities of straight society; for officialdom to have any part in their relationships, for the right to get on board the pain-riddled flagship of Western respectability called marriage, or to want to be part of such a dubious archaic institution endorsed by dreary cold governments that could have hung them not so long ago.

A former Australian prime minister recently informed (or misinformed) the nation that marriage was the institution that held society together. I am not sure that society is indeed holding together – and in fact it seems to be rapidly falling apart. If there is a relationship between the state of marriage and the condition of society then it could be that the sum total of unhealthy immature marriages have led to an unhealthy immature society. After all, the family is not just where love resides, it’s also where most of the world’s madness is born. Unhappiness begins at home, and as we know (but are reluctant to talk about), marriage is not all apple pie and motherhood. In fact it’s such a serious health risk that there might be a judicial enquiry into it one day.

Perhaps what the defunct Prime Minister means is that the modern family is holding consumerist society together; the hurtling competitive capitalist breeding and spending system that is becoming increasingly anxious, desperate, compliant and exhausted; the divided and loveless social order of gross economic disparity where the modern family is collaborator and fundamental building block in the perpetuation of a disastrous dog-eat-dog world.

Politicians and commentators speak glowingly (and insincerely) of "ordinary families", the fantasy sanctuary of common sense out there in the suburbs where the so-called 'real people' uphold civilisation, decency, love and normality. Psychotherapists, police officers, health workers and family members themselves might seriously beg to differ. I can’t remember having ever met an ordinary family or an ordinary person for that matter. Deep down we are all so wildly different. We are all a peculiar minority of one. And like the gay individual, we have all been punished or persecuted for our unique difference at some stage. Such persecution keeps most of us toeing the line, huddling in a group and sticking with the system. It causes us to repress our difference or devalue it with embarrassment. It makes us good consumers: impressionable, anxious, needy, insecure, compliant, powerless and mad as hell – all of the qualities required for a deluded modern marriage.

I sat one evening by the shore in Southern Queensland, looking out to sea at the end of the day. On a large rocky ledge a little way out, a bride and groom were being thoroughly done over by a wedding photographer who was frantically stumbling about snapping the right angles and great shots. Her white bridal dress billowed in the evening breeze, the waves danced around and the setting sun painted the sky with all the amazing and glorious colours. In a negative moment the bleak thought came to me: "Ah-ha.. another divorce gets under way". Yes it was a bitter thought but at least nobody got hurt, and in my heart I wished them well – including the photographer. Old sayings crossed my mind: "They had such a wonderful relationship but then they went and ruined it by getting married". And another: "Wedlock, a padlock!" A rural friend made an automotive metaphor: "A marriage is like a mudguard on a car, all shiny on the outside and all shitty underneath". And of course, Zorba the Greek had a say on the subject: "... is not a man stupid? I'm a man, so I am married. Wife, children, house, everything. The full catastrophe."

So why the catastrophic marriage? Why this primal fetish; this need for ritualistic, state sanctioned bondage? Do couples, heterosexual or otherwise, want a protective magic spell cast upon their union by a celebrant, to preserve their love and fuse them together? Is it as primal, infantile and superstitious as that? The problem with entering into the primal realm, is that we may enter into primal behaviour also: jealousy, possessiveness, domination, tyranny, hostile rivalry and emotional enslavement – all the things married couples can do to each other that they would never do to their friends. The flip side of romantic love is romantic hate. It all becomes a human rights disaster and eventually the marriage collapses. The spell is broken – sometimes in the arms of another. Tawdry media calls this cheating, but it could also be called a revolt against oppression.