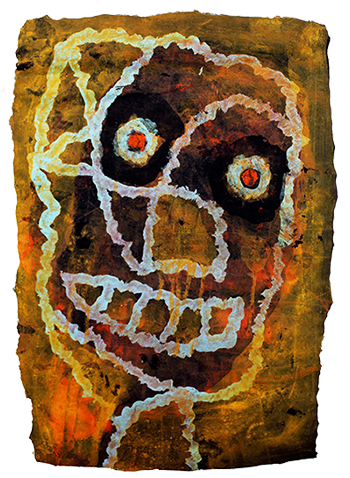 He fled in disgrace from formal education and pursued a successful career as a factory labourer and meatworker where he nurtured his art and philosophy before beginning work as a political cartoonist for a daily newspaper in Melbourne in 1969. The Penguin Leunig, his first book of collected cartoons, was published in 1974 and since then has produced twenty-three more collections including books of newspaper columns, poetry and prayer. His prints, paintings and drawings have been exhibited broadly and are held in various public and private collections.

Leunig’s public appearances have included on-stage conversations with people ranging from the Archbishop of Canterbury to an Indonesian President, as well as painting and poetry performances at the Sydney Opera House accompanied by the Australian Chamber Orchestra. He has also performed on stage in the Purcell Room at the National Theatre in London as the special guest of the extraordinary poet and musician Ivor Cutler, the non conformist Glaswegian humorist, anti-noise crusader and Beatle mentor. London's Trestle Theatre Company created an elaborate stage production based upon his work called 'State of Bewilderment' which toured England, Ireland, Europe and Australia in the early 1990's.

Leunig provided the images and verse for the Australian Chamber Orchestra's productions of the Carnival of Animals and the Carnival of the Humans. In 2001 he wrote songs and lyrical poetry with Neil Finn, Brett Dean and Richard Tognetti for the ACO's production of Parables, Lullabies and Secrets and developed a series of short clay figure animations for SBS Television. Leunig’s various collaborations and journeys with indigenous painters from remote communities in northern and central Australia have greatly influenced his art, humour and philosophy.

In 1999 he was declared a national living treasure by the National Trust and awarded honorary degrees from La Trobe and Griffith universities and the Australian Catholic University for his unique contribution to Australian culture.

A watershed came in Leunig's daily cartooning work with the advent of the 'war on terror' following the 9/11 atrocity. His cartoon commentary bitterly opposed the war and the invasions of Afghanistan and Iraq, a position that put him at odds with editors, commentators and various hostile or militarist elements in Australian society; an experience that left Leunig feeling more disillusioned and alienated from his culture than he had felt during the time of his youthful opposition to the Vietnam war. Distracted and embittered by the destructive, polarized cultural climate and the morbidity of the dire political events during this time his work showed a decline in the more lyrical or gentle themes and he stopped drawing his whimsical characters Mr. Curly and Vasco Pyjama. Throughout this period however, the odd duck made a forlorn appearance and the moon hung faithfully in the skies of his drawings; remote, simple, soulful and as mystical as ever. His work still appears regularly in the Melbourne Age and The Sydney Morning Herald.

He is a devout nature lover and spends his time between the solitude of the bush in Northern Victoria and a home in Melbourne where he enjoys talking to strangers in the street, walking in the local park, morning coffee in the café, chamber music in the concert hall and attending to work in his studio. He is married and is the father of four children.